The Trajectory of a Viral LinkedIn Post, from Zero to 1 Million Views 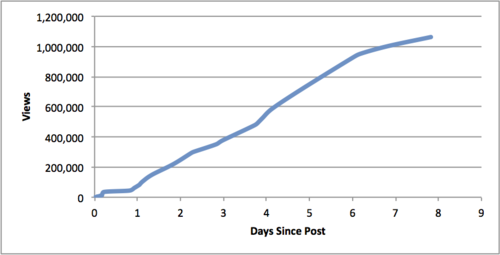 TL/DR: A few weeks ago I posted a message on LinkedIn and it quickly took off, getting to over 1 million views and 10,000 likes.  Here’s the data behind the post’s trajectory.

It was a Thursday afternoon at 2:04 PM EST.  Is that a good time to post on LinkedIn?  I have no idea.  But, this post started to gain traction quickly.

I kept a log of the time, likes, comments and views for the next few days.  I was curious to see how the post would perform at night, over the weekend, and when it would eventually die out.

I finally had time to type all my data into a spreadsheet (we were writing it down on a whiteboard), and do some analysis which I wanted to share with any curious minds out there.

You’ll notice in the analysis below there are other data points beyond what is written on this board.  I also took a few screen shots on my phone whenever I’d check the status of the post on mobile and used that data as well.

In the first day, I was averaging 88 likes/hour, 8 comments/hour, and 6,700 views/hour.  Here’s what that looks like visually.

I was fairly certain this trajectory would die over night.  LinkedIn tends to be busy during the workday while sales people and recruiters are on the hunt.  While the momentum slowed considerably, it kept up 7 likes/hour overnight.  This was apparently enough to keep us alive.  Although, it’s worth noting that for the next week the likes and views per hour never got this low again (see below).  If they had, I think the post would have died a lot sooner than it did.

I began to think that the key metric here was “like” momentum (or likes/hr, and the derivative of that number).  If you get likes, then that person’s network will see the post.  If those people like it, the post will gain momentum.  This is how something goes “viral” on LinkedIn.

You’ll notice a huge spike in likes and comments per hour on these charts.  This happened between 5 and 7 EST the first night of the post.  I can’t help but wonder if this same spike had happened at 2 EST, would this post had continued on that insanely high trajectory?  Instead, the momentum was curtailed a lot overnight when people leave LinkedIn for their families, or Facebook :).

Of course, beyond likes, comments also make a post display to the commenter’s network.  In this case, comments were a lot less frequent than likes.  I’ve definitely seen posts with more comments than likes, usually this is a question someone is asking like “How do you deal with bad managers” or something like that.

Re-shares is another metric I could’ve tracked.  However, on LinkedIn, when something is re-shared, the likes of that post aren’t aggregated to the original post.  I also noticed that re-shares were getting 1-5 likes on average.  My hypothesis:

“This is so Stupid!”

When I showed my girlfriend the post, she immediately reacted that this was “so stupid!”  Why would people be liking/commenting on this so aggressively?  According to her, I’d posted some really smart things on LinkedIn before and nothing had taken off to this extent, why this?

I think that while the post was simple, it wasn’t stupid.  Here’s why (I think) it took off:

Most of my LinkedIn posts take slightly longer to appreciate, have less general appeal, and are more intellectual than emotional.

That Friday morning, the momentum picked back up again.  I was pleasantly surprised.  I was also thinking in the back of my brain that this post would most likely go the way of the dodo that weekend.

I was surprised again as the momentum continued into Saturday and Sunday.  Suddenly, my typically pessimistic attitude became a lot more bullish.  I started to get a ton of re-shares of my post and so I thought that Monday would be a HUGE day.  The post was going to explode as people got back to the office, and back on LinkedIn.

The Rest of Time

The post did keep growing, at basically the exact same rate it had the past few days.

Yash ended up winning the bet.  His strategy: it’s just going to keep growing at the same rate it has been.  It’s interesting that for a long time (1 week is long in the world of the internet) the growth of likes and views was very consistent each day.

Here are the likes and views/hour over the course of the first week:

It’s actually pretty incredible this post kept having such a high number of views and likes per hour even a week out.  This made me re-learn the definition of “viral” - this post was “infecting” a large percentage of the people it touched, who were then spreading it through their networks.

However, all good things must come to an end.  My guess is that the same people were getting this post in their newsfeeds and thus a lot less likely to like it, meaning less people were being infected.  Here’s what the trajectory flattened out to over the last few weeks:

As you can guess by this chart, I’m no longer getting LinkedIn notifications every minute with new likes and comments.  This is a welcome respite despite the initial excitement and wonder it had sparked.

Honestly, this post was probably more of a loss than a gain for me.  I have another 1,500 followers and connections on LinkedIn.  But, I don’t think the vast majority of them are relevant to my general business activities.

I got a lot of joy out of the first few days of this thing taking off and it put a smile on my face.  But, it was definitely a huge distraction.  It’s a lot of dopamine for someone to see their written word being “liked” so much, too much to ignore.  After a week or so, this rush wore off, and I realized I’d wasted hours of my life obsessing over the number of likes I was getting.

In an ideal world, one could spark emotion in readers through a simple and easy to digest message that had a call to action which helped your business.  I think this is what they call product/market fit (and it’s funny how the growth in likes/views charts reminded me of my days working in VC).  While it’s nice to have product/market fit on anything, I’d much prefer it on a high margin SaaS business than a 2 line post :).

Of course, I did gain some knowledge about how the internet works.  And, you never know when that will come in handy!  Plus, I think these metrics are interesting to any marketer or entrepreneur who’s looking to benchmark their social posts. 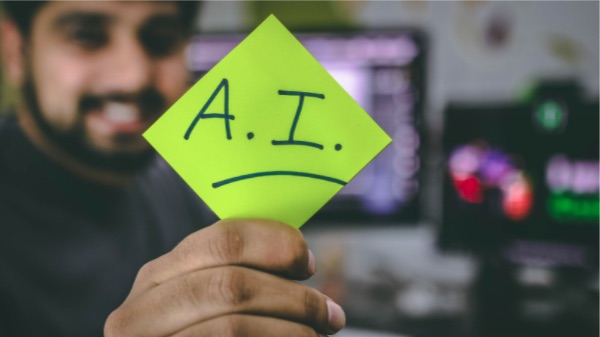 Interest in AI Recruiting Tools Is up by 73%: What Does It Mean for HR Teams?

Over the last 6 months, there has been a 28% increase in the number of people looking for AI...